Well, we survived the storm, such as it was.  Fortunately for us here in South Florida, the impact was minimal. Heavy rain and strong wind gusts kept us indoors but other than a few little tree branches on the ground and some patio screens blown out, we are no worse for wear.  We didn't even lose power! As a result we have several coolers filled with melted ice and a plenty of hurricane food/supplies untouched.

An unspoken rule of storm mode: there is no dieting. Whatever eating plan you're on goes out the window. You eat for survival..and pleasure.  In my family, a pre-storm trip to the grocery store is a bit different than some folks.  We are not scouring the canned food aisle throwing Spaghetti-O's and soup into our carts (eww..can you really eat that stuff cold?). Instead, we shop as we normally do, primarily along the (healthier) outer aisles of the store.  Most produce will keep for a long time even unrefrigerated, so I grab bananas, apples, carrots, etc. along with a nice ripe avocado and a few salad greens.  I then head to the bakery for whole grain bread & tortillas for sandwiches, bagels for breakfast. I peruse the deli for hummus and a small package of cold cuts to appease the omnivores.  One short trip down the snack aisle for crackers and cookies (thank goodness Oreos are vegan!) and peanut butter, maybe a slab of guava paste for a sweet topping on Cuban crackers. Of course there is the necessary bottled water, batteries, etc. but most of the time I have that already on hand.  One last stop at the beer & wine aisle and we're set!

While we have power, we gobble up any leftovers in the fridge, then we don't cook any more. If we're still hungry or bored with what's available, we'll order a pizza or other take-out, sit around the tv watching the Weather Channel and munch out.  Kristyn introduced me to a surprisingly good vegan pizza courtesy of Domino's of all places! She encouraged me to order online so that I could see the little message that pops up when you opt out of cheese. I know it's tough to read but the little pop up window states, "Attention! We won't put cheese on your pizza. Your pizza just shows cheese here to keep the Dairy Farms of America happy." How wonderfully funny is that?


Anyway, Kristyn and I shared a very nice Spinach/Mushroom/Tomato pizza while the boys enjoyed their meaty greasiness. 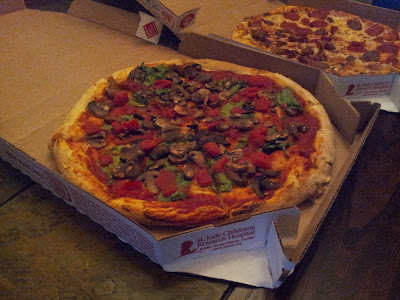 Looking for some mindless busy work,  I caught up on some laundry & ironing, loaded up the DVR and made my way through several TV shows I'd recorded, including a couple episodes of Jazzy Vegetarian.  I love this lady, she's like a cooler, nicer Barefoot Contessa!

Today we are almost back to normal here. Chip has one more day of Storm Duty which means long hours and eating on the run. Hopefully he'll be home for dinner because I plan on making a couple of selections from this menu. It may not be chili weather yet but with all of the rain & dreary weather, I feel like some warm comfort food.

Preheat the oven to 375 degrees F. Line two large baking sheets with parchment paper.
Spread the chips in a single layer on the lined baking sheets. Put the tomatoes, bell peppers, olives, and cilantro in a medium bowl and stir gently until thoroughly combined. Season with salt to taste. Sprinkle the mixture evenly over the chips, then scatter the vegan cheese evenly over the top. Bake at 375 for about 10 minutes, until cheese is nicely melted.

Doesn't that all sound delicious? I doubt I'll make any dessert because, looking at the package of empty Oreos on the counter, I don't think we need it. *grin*

Hope my fellow Floridians are safe & sound, and sending prayers for safety to my out-of-state friends who may yet be impacted by Tropical Storm Isaac.