I'm originally a Midwestern girl, born in Ohio but relocated to Florida when I was just a tot. My mother grew up in the hills of West Virginia, the daughter of a coal miner and a homemaker who struggled to clothe and feed five children on meager income, making a home in the "sticks," as Mom called it. She called herself a hillbilly, and was proud of it, so I carry on that pride. Grandma was famous for saying, "We may be poor but we're clean;" she kept her tiny rental house spic & span and was known for being a phenomenal cook. She was able to whip up a meal with whatever scraps of food were on hand, nobody ever went hungry at her table. In fact, my bio dad claims it was Grandma's cooking that won him over, falling in love with her cooking before he did my gorgeous mama!

My mother was not a particularly adventurous cook, better known for her baked goods than anything else, but we had a homecooked dinner on the table every night, even though she worked a full time job outside the home. It was the 70's, so meat was the center piece of the meal. I know the menus well; when I turned old enough (about 12 or so) I took over the nightly cooking, giving mom a much-needed break. Baked chicken. Baked pork chops. Tuna casserole. On the weekends, there was grilled steak and the dreaded Sunday Pot Roast. Oh, how I hated that roast! I'd push the pieces around on my plate, trying to hide them under a pile of mashed potatoes, but Mom always caught me. She didn't make me clean my plate, but I at least had to force down a couple of bites. I swear, that plate of beef is the reason I became a vegetarian! But, I digress.

When the weather turned chilly (by Florida standards, this means below 75 degrees!) Mom would make a big pot of chili or beef stew and we'd "eat off" that all weekend long. Ooh, there was nothing like taking a slab of white bread and dunking it into a bowl of chili or stew! Simple comfort food, that's a Midwestern diet.

Mom continued making her "famous" beef stew for many years; all of my girls have fond memories of sitting around Grandma's table with a loaf of bread and a big bowl of soup. Even as vegetarians, they would pick out the pieces of beef and just eat the veggies, not willing to give up that taste and experience! Now that mom is gone, and I'm a vegan, I have been searching for the closest facsimile to Mom's. Dad has passed along the original "recipe," of course, but I've never been able to replicate it. I pretty much gave up, thinking we'd all have to settle for a stew-less life, and then this happened..

My daughter Kristyn alerted me to this recipe, and therefore the blog where it's posted. I must've been living under a rock, how is it that I'm just now discovering the Shannons? I love all things vintage and have actually modernized a few retro recipes on my other blog, but these folks took it to a whole new level, tackling the sacred Betty Crocker! A noble effort, with wonderful results! This version is not quite the same as Mom's; hers wasn't as savory/spicy as the Shannon's, but it's close enough. I think that Mom were here she'd give it her seal of approval.

I made a couple of changes using what I had on hand, substituted a bag of frozen mixed vegetables for the carrots/peas, and used veggie broth instead of the bouillon.  I didn't have marjoram or celery seed so I left them out this time, but would definitely not prepare this without the creole seasoning! I think it adds a very nice punch without being too spicy.

Spray a glass baking dish with Olive Oil Cooking Spray. Place the Potatoes in the dish skin-down. Then a layer of Baby Carrots, then Gardein, and then last layer should be Onion Slices. Then spray with more Olive Oil Cooking Spray. Bake uncovered for 30 minutes, or until the Onions and Gardein are brown. When you remove dish from the oven, separate the Gardein and Onions into a bowl and the Potatoes and Carrots into a Dutch oven.

Mix the remaining ingredients into the Dutch oven. Keep the Gardein and Onions separate for now. Be sure and stir it a few times to make sure the Herbs are mixed in. Put your Dutch oven with the lid on back into the oven and let simmer for another 30 minutes. Check on it and stir during that time once. Remove from heat and taste. This is when you can check to see if your vegetables are tender, and add more Braggs for salt or pepper if it's too bland. I add a few dashes of Black Pepper and put my Dutch oven back in for another 10 minutes because my Potatoes weren't right yet.

Then, mix in Onions and let simmer on your stove top for 10 minutes on a medium heat. This pot should make around 5-6 bowls of Stew. Separate your Gardein into how many servings you think you will want/have. I based mine our soup bowl size. To serve, put one serving of Gardein into your soup bowl and then with a ladle fill the bowl with Stew over the Gardein. This will reheat your Gardein and keep it from getting mushy in the broth.

When you go to out away your leftover Stew, store the Gardein separately. 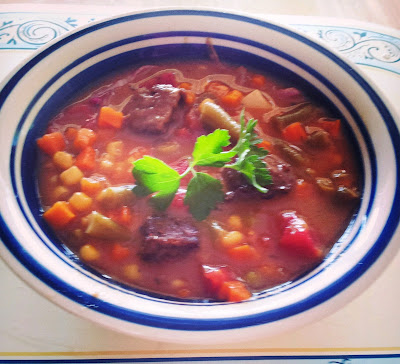 Note: you're not seeing double; I posted a photo of this dish the other day but not the recipe!

Tonight I'll be using the leftover stew to make a quick Shepherds Pie, be sure to stop by tomorrow for recipe/review!