On My Hearth: Black Bean Soup

As I've mentioned, Chip likes soup. A lot. If I didn't know this before, I became well aware of it when we returned home from the cruise and he told me how much he enjoyed having a first course of soup every night. Even if he didn't like a couple of the other dishes, it was pretty much given that he'd gobble up the soup, and therefore not go hungry.  He suggested that we could do something similar at home, and when seeing the look on my face he assured me that he wasn't asking me to cook a 5-course meal every night (whew!), just that we have some homemade soup available just in case he didn't like a new vegan dish I was serving.  I agreed, so this week I've been cooking, eating and stocking my freezer full of Lentil, Minestrone, and, last night, Cuban Black Bean soup. 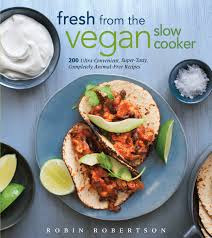 This recipe comes from Robin Robertson's latest, Fresh from the Vegan Slow Cooker, a wonderful cookbook I've recently added to my collection.

Remove and discard the bay leaves and stir in the sherry (if using), vinegar, and liquid smoke. Taste and adjust the seasonings, adding more salt if needed.

Serve hot, topped with the avocado, tomato, and cilantro.

Before I offer my opinion on the final outcome, please understand that I grew up in South Florida where there is a heavy Latin influence, where Spanish is spoken freely and abundantly, and where Cuban restaurants and supermarkets are everywhere. From my best friend's kitchen to the best restaurant in Miami, I've eaten and enjoyed my share of superb Cuban food. This was...good. It was a bit spicy  which is not typical of Black Bean Soup; Cuban cuisine is not known for heat, just flavor. I've never seen a jalapeno or a slice of avocado grace any Cuban dish, that's more typical of Mexican or Tex-Mex.  Also, despite using my immersion blender to puree, the end result was not as thick & creamy as it should be. I ended up adding cooked rice before serving, just to bulk it up a bit, turning it into Arroz Con Frijoles Negros. Now, that being said, we still enjoyed the meal; it was very tasty and filling, it just wasn't the Sopa de Frijoles we've both known and loved.  If you have no preconceived notions about what it should taste like, or you just want a different experience, then by all means, try this recipe! For myself, though, I'm going to stick to the version that tastes like home.

In a complete cultural twist, we will be spending today at a Celtic Festival, looking forward to some good music, food, and perhaps a pint of ale or two!