As you can see, I completely skipped Day Twelve. Since it was a travel day, I ate leftovers and Chip ordered Chinese food for dinner.

And as for Day Thirteen, only halfway followed it as well.  I had good intentions, but Life got in the way. More on that later..

My plans for today included a 8:45 appt for my yearly mammogram, followed by a Whole Foods & library run (two of my favorite places on the planet).  Once again, today's menu is intended to be eaten on a weekend, and I didn't have the time nor energy to cook breakfast. I ate a bowl of (whole grain, high fiber) cereal and coffee, figured I'd get back on the plan at lunchtime. Ran out to my car, turned the key and..pfft..nothing. Dead battery. sigh. Rescheduled my mammo, called Chip who said he'd give me a jump at lunchtime (ooh, that sounds fun!) but in the meantime, housebound.

C came home, provided the promised service, and while he ate lunch I ran to the grocery store, grabbed ingredients for the rest of the day. Except for edamame, 'cause that's just a weird snack in my opinion. Anyway, by the time I got home with the groceries, I was starving! I popped the beets in the oven, cut the oranges, and then heated up a bowl of leftover Sweet Potato Chili to tide me over.  When I finally got around to the salad, it was soooo worth it!

Before going vegan, my only interaction with beets was either in a baby food jar (which my kids hated) or the pickled variety found at a salad bar. Neither were very appealing. I recently discovered that they could be wrapped in foil and roasted. Oh. my. goodness. What a difference in taste, not to mention texture! In this salad, they are paired alongside the citrusy-sweetness of navel oranges and topped with a ginger-agave dressing, perfection!

I was less than thrilled with dinner. The stir fry tasted as bland & boring as it appears. Little flavor & spice, seriously lacking in color. Blech.

Even with the substitutions, I still met my goals: 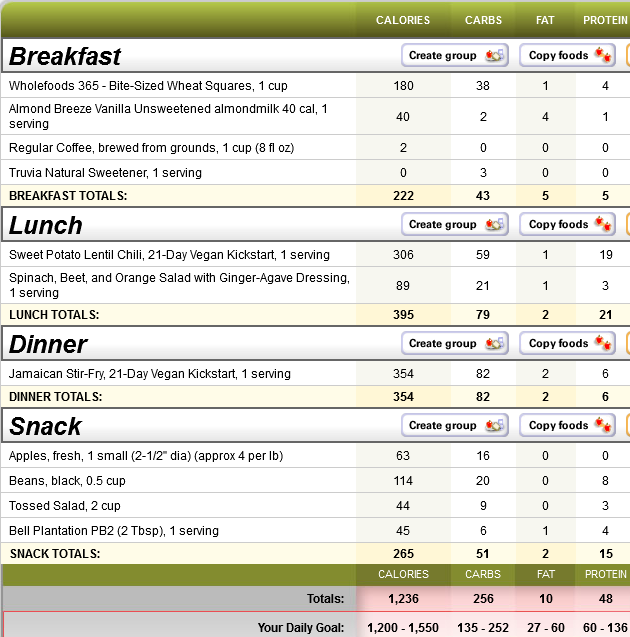 Fitness:  It's post-dinnertime here and I haven't done much in the way of fitness.  I may hop on the treadmill later or take Loki for a walk, will see how it goes.

Have a great evening..
Posted by The Vegan Gypsy at 7:27 PM