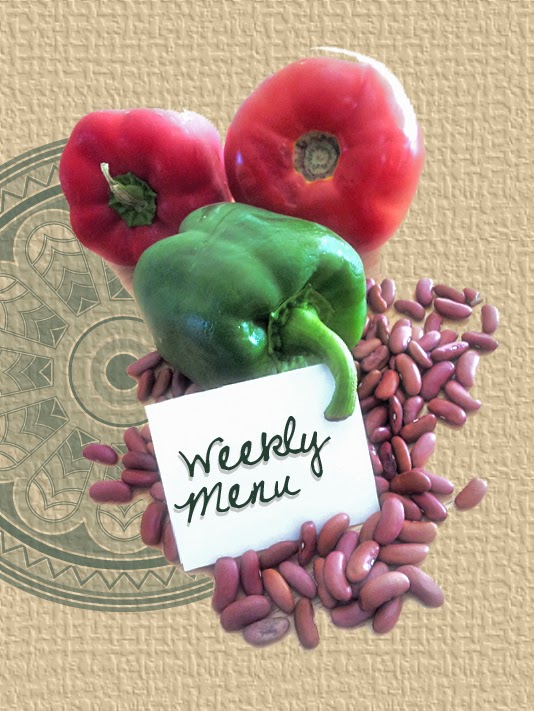 Well, this past week I followed my menu plan pretty closely, with a few changes using what I had on hand.

The Verdict: Omni Hunny didn't try this dish, but I thought it was delicious! I tasted the stuffing before filling the squash, found it a little bland so I added another small Chipotle pepper. That did the trick! Since I used smaller squash than called for, I had a lot leftover which would make a good burrito filling!

I did make the Grandma's Minestre but honestly wasn't thrilled with the end result and didn't snap a picture. There was something I didn't care for, some spice or combination of ingredients that made the soup bitter. *shrug* Oh, well, they can't all be winners!

I didn't get around to making the Kale and Cannellini Bean Soup but cooked a couple of other interesting dishes instead!


This gorgeous Romanesco Cauliflower arrived in my produce delivery this week, so pretty I hated to eat it! I didn't want to boil or slow cook away the bright green color, so I decided to roast it with a little bit of olive oil, pink salt, and a pinch of red pepper flakes.

I served it over whole wheat pasta, scrumptious! I ate much more than I should have..grin..it was just too good!

I enjoyed those roasted veggies so much, I decided to do the same with brussels sprouts the next day.

On Friday night, Chip and I got dressed up and went out for happy hour at a new restaurant in town, The 31 Supper Club.  I rarely take selfies but I was so proud that I could wear this new skirt, one size smaller!


We loved the atmosphere, felt like we had stepped back in time!

The Golden Vegan Chickpea Stew is based upon this recipe, but I left out the tomatoes because the idea of them in curry didn't appeal to me, and the jalapeno because I forgot to buy one at the grocery store.


The Verdict: Once again, Chip chose to forego this dish. He's not a fan of curry, which is fine because I certainly am! I'd make this again but wouldn't leave out the jalapeno as this wasn't quite spicy enough for my taste buds.

I had a bunch of apples that were going soft, so I decided to use them up in an Apple Crisp.

The Verdict: Served warm from the oven and topped with a scoop of vegan ice cream, this was absolutely delicious! We both scarfed down a generous portion and were happy to enjoy leftovers the next day or so. While this may not be good for the numbers on the scale, it satisfied my sweet tooth for a little while, worth every calorie!

The Verdict: The Creole-Style Jambalaya was really tasty, more like red beans & rice than a true Jambalaya. Chip said: "I liked it but I prefer my Jambalaya." (made with Zatarain's rice mix and Tofurky sausage)


Yesterday I was all set to make the Chipotle Corn Chowder and realized I didn't have any frozen corn! Too lazy to run to the grocery store, I scrounged the fridge and pantry and realized I had all the ingredients to make the Lentil-Vegetable Soup instead.


The Verdict: While this soup doesn't take a very pretty picture, it tasted delicious! Just a little bit too thin for me, so I served over a scoop of brown rice. Perfect for a chilly Sunday evening. Since Chip doesn't like lentils (unless I disguise them very well), he ate something else.

This week's menu will, once again, be mostly from the Fresh from a Vegan Slow Cooker book. I'm adding one recipe from Fat Free Vegan Kitchen because it looks so yummy and I have lasagna noodles begging to be used.

I'm going to try posting the recipe/reviews as I make them, time permitting, so I hope you'll check back often!

Have a wonderful day,