It's rare that my hunny makes any special dinner requests. For the most part, he happily eats what I cook unless it's something he really hates (chickpeas, for example).  On those rare occasions, he'll make throw a frozen pizza in the oven or boil a vegan hot dog. He's not a picky eater, nor much of a foodie, making meal time pretty easy around here. So, when he asks for something specific, I try to make it happen.

Last week he came home with this baked tofu, on sale at our grocery store. 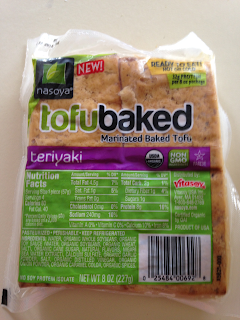 A couple days later he brought home this rice. 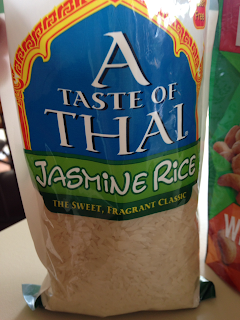 Hmm..I could see where this was going. He asked if I could make "something like the cashew tofu stuff we get at the Thai restaurant."  Sure, why not?  So I started searching. It didn't take long for me to find this yummy-looking recipe over at Oh My Veggies: Cashew Tofu Quinoa Bowl. Hey, I have all of the ingredients, I can do this! Before I started cooking, I sent Chip the link and photo for his approval. He shot this back: "Go easy on garlic and broccoli. Leave out edamame if we don't have it; ok if we do. "  Ha ha! Ok, here goes!

Even though the tofu is already baked, I knew that Chip would want the fried version he's accustomed to. So I cut the strips into smaller pieces and lightly pan-fried, making sure all sides were brown and toasty. The original recipe calls for 2 tablespoons of oil which is not excessive compared to what is used in traditional restaurant dishes, but that's still a lot for me/us who are mostly oil-free.  So I used only 1 tablespoon of sesame oil which was more than enough. 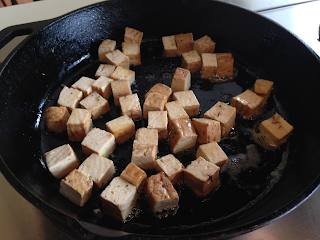 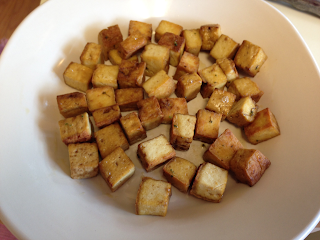 I then moved on to the veggies.  I  used the full 2 cups of broccoli but cut back on the edamame to only 1/2 a cup, added a few extra strips of red and yellow bell pepper. 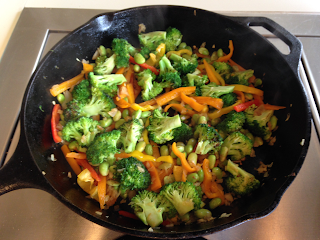 Since he isn't a big fan of quinoa, I served it over "his" rice, as requested. The end result? 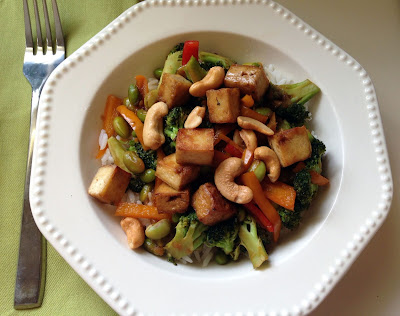 Pretty as can be and absolutely delicious! Chip gobbled up every bite, actually cleaned his plate which is rare for him. He gave the dish high praise, said it was restaurant-worthy. Woo hoo!

For the record, I had a small portion and really enjoyed it as well. If cooking just for myself, I'd probably have just used baked tofu and eliminated the oil completely, making it more McDougall-compliant, but this was just fine for an occasional treat. Oh, and I'd serve it over quinoa for the added protein.

Big thanks to Oh My Veggies for the inspiration!